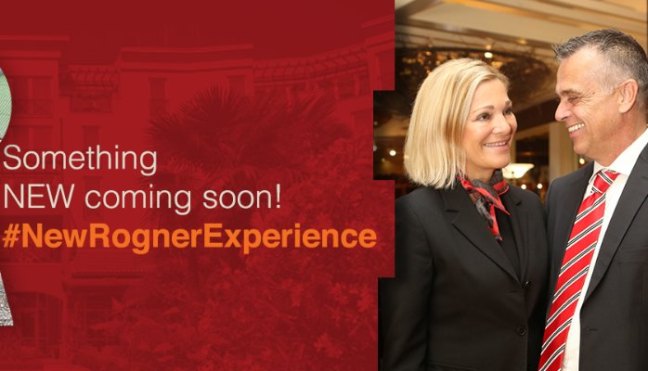 The directors of Rogner Hotel Tirana, the nice German couple which is successfully managing this hotel for some years now, have revealed in an exclusive interview for “Follow Business” Magazine how the Hotel has planned to reward its most loyal clients and its prospective ones on its jubilee celebration.

They confirm that 2016 will bring a new era for the prestigious hotel, located at the center of Tirana.

2015 marked the 20th anniversary of Rogner Hotel Tirana. What are the things that you would like to do on this occasion?
20 years are a lot for a business in a new state like Albania. They embody existential experiences, the difficulties the country has gone through during these years, especially the business of hotels/tourism, which is closely related to the foreign investments in Albania. We have experienced them all. But, after all these years, overcoming such obstacles is part of our success, thus transforming Rogner into a brand.

The jubilee celebration usually goes by dinners and galas where the best clients are invited and offered the best services as a token of gratitude. That is what you would usually expect. But, NO. We have decided that our most loyal clients and prospective ones can be rewarded by bringing novelties in the industry of hospitality, thus erecting a new building with more rooms and another conference room with an appropriate capacity for big events including the latest technology and modern design as well as a new wedding hall with a capacity over 350 people and a luxurious arrangement.

What has been recently drawing attention is the new building that is rising quickly, day by day. Tell us about the next revolution coming from R.H.T.
2016 will bring a new era for our hotel. This new building, which will be functional in May, includes 40 new rooms and suites, one of which will be a Presidential Suite. I can say that the arrangement will be mixed, between a rustic and modern style, in order to bring the “smell of home” and the comfort of a five-star hotel. Part of this building will be a SPA center, including the complete range of services, and a gym with considerably areas facing the garden with the most contemporary equipment.

Rogner Hotel Tirana is well known as the meeting place! What strategy resulted so successful to make it the most favorite spot for the Albanian and international elite?
This strategy lays in the very opening of this hotel because it was built to be the hub of business in Tirana. Since it is a five-star hotel, this is the very moment where you select the category of the clients who will be its guests. The conferences and the business meetings constitute the second major service of our Hotel. That’s why it has always been a magnet for the international and local elite to choose Rogner as the right place to enjoy services starting from the morning coffee to big conferences.

What can you say about yourself?
What motivates you to work for Rogner Hotel Tirana? What makes it so special in your opinion?
We are the general directors of Rogner Hotel Tirana. We have been running this “House“as we like to name it for six years with two years pause in between. We are married in life and good partners at work :). Part of our small family includes four dogs and our big family is made up of more than 120 employees. Initially we accepted the invitation of Mr.Rogner to be part of his business without hesitation. Because first of all, we know the potentiality of this gentleman to do business and secondly, we are fond of challenges and especially of bringing them to the end by working with passion and soul.

At work, what puts a smile on your face?
The smiles of the clients! A positive note in the testimonials ‘book or on the online portals! When the service staff is full of smiles and motivated. The client, who comes back to our “home” again! The hotel which hums every day!

The distinguished Austrian investor, Robert Rogner, has made this Hotel known for its philanthropic efforts. What feedback have you received from the public and what are the further steps in this regard?
The charity has been the first act of Rogner Family in Albania, even before the hotel was built. It dates back to 1992. Most of the charity works are not known to people but I can mention some (even though Mr. Rogner would not like that). Fshati SOS (SOS Village) has been built by this family while a new building has been bestowed on this village. Another center for the orphan children has been built in Elbasan city under the auspices of Mother Theresa sisters. In addition, the Rogner Family is in constant cooperation with the Federal Association of the Order of Malta which operates in the north of Albania. On the other hand, there has been a case I have also experienced and would like to share with your readers. It concerned the daughter of one of our employees which was diagnosed with acute leukemia. At that time, the visa regime was still in order, so, in cooperation with the Austrian Embassy in Tirana and thanks to the grandeur of Mr. Rogner, which he showed once again, the girl was transported to Austria immediately with all the expenses covered. Regarding the charity-related sponsors, I can say that they are part of the annual plan of our business. I can mention similar causes like the children suffering from the Down Syndrome, events for the orphan children and others.

What advice would you offer to those who are inspired to become successful in the hotel industry?
One advice, which has turned out to be a good one for us, is that of being close to the people! We do not behave like directors, we do not dress as such, we consider ourselves in service of each and every client and we talk closely with them. This way, we treat the client as a unique individual and what is far more important, everything is done with a big smile on our faces.

We can find you running around the hotel, meeting people, always being at the center of affairs and what is more important with a smile in your face. How important is this for a hospitality business?
This is everything in this kind of industry needs. Whoever has money today may build up luxurious environments, but we are lucky enough to have a dedicated staff which has embraced the spirit of team work to the point of making even sacrifices in order to fulfill the clients’ demands. We are lucky enough to have many employees, hired since at the opening of this Hotel and this is our greatest asset ever.